The DIY market grew slightly in 2017, closing the year with a turnover slightly higher (+0.7%) than that recorded in 2016. If the analysis is extended to the past five years (2013-2017), the turnover is definitely up (+1.8%), topping the 12 billion euro mark, a clear sign of a post-crisis recovery. This is the situation, for the DIY sector, that emerges from the latest Osservatorio Non Food GS1 survey.

“The figures for last year therefore confirm the positive signs and the upturn already seen in 2015; one of the factors driving the recovery of the sector is the expansion of the modern specialised sales network, which has been renewed in terms of format and services so as to exploit the growing “Do-It-Yourself” culture and its expansion to different customer segments. The role of the sales assistant continues to be crucial, but it must be supported by new and attractive display solutions designed to help customers identify the items they are looking for”, explains Marco Cuppini, Research&Communication director at GS1 Italy.

In 2017, the sector “Gardening, Free Time and Car Accessories” accounted for 51.1% of the sector’s total sales, managing to secure just over 2 percent points more than “Building and DIY”, which accounted for 48.9%.

Specialised stores once again proved to be the main channel for DIY purchases (i.e. related to the plumbing, building, hardware, carpentry, gardening sectors, and so on) in 2017,, even though their market share (64.0%) was slightly down on the previous year (−0.7%), as was their turnover (−0.5%).

“The strength of this channel – Cuppini goes on – in addition to the breadth and depth of the range, is that these outlets have dedicated staff who receive excellent product training, and can therefore help and support consumers throughout the purchasing process”.

Despite this, specialised stores are the only channel within the DIY sector found to be shrinking. Instead, specialised superstore chains are growing, last year once again recording increases in both their market share (up from 27.5% in 2016 to 27.8% in 2017) and their turnover (+2.0%).

This channel, whose network is growing all the time (there are currently around 800 outlets), have a number of specific strengths: impactful settings, displays organised to facilitate purchasing, effective communication, rational and orderly layouts by product category, and targeted promotions.

Improving the shopping experience by enriching the range of services according to a cross-channel logic. “This is the direction in which several DIY brands are now moving in order to reach a broader and more composite user target, which includes millennials and women, currently two of the categories least satisfied by the DIY shopping experience” says Marco Cuppini.

Conversely, in 2017, food superstore chains recorded the greatest growth in turnover (+5.6%) and in market share, which increased by almost half a percent point to over 8%. A longer-term analysis of the sector’s performance, however, revealed a decline (7.2%), indicating that in reality the recovery has yet to materialise.

Analysis of the macro-segment “Gardening, Free Time and Car Accessories” revealed that sales were up on the 2016 figure (+1.9%). This is a continuation of the positive trend recorded in the last few surveys (which show a 6.0% increase in turnover over the past five years).

In 2017, the car market, too, grew once again in comparison with the previous year, thanks to a recovery of consumers’ income levels and promotions implemented by manufacturers and dealers, especially in the first half year. This trend had a positive impact on the car accessories segment, which after several stagnant years is starting to look much more lively again.

According to the 2017 figures, specialised stores (garden centres and repair shops) were once again the undisputed market leaders, taking a 77.8% share (0.6% less than in 2016) and recording an almost stable turnover (−0.1%).

Specifically, the formats recording the best performances, in terms of network expansion, included agri gardens and garden centres. This is a reflection of today’s growing “green culture”, which naturally finds expression in development of urban kitchen gardens. 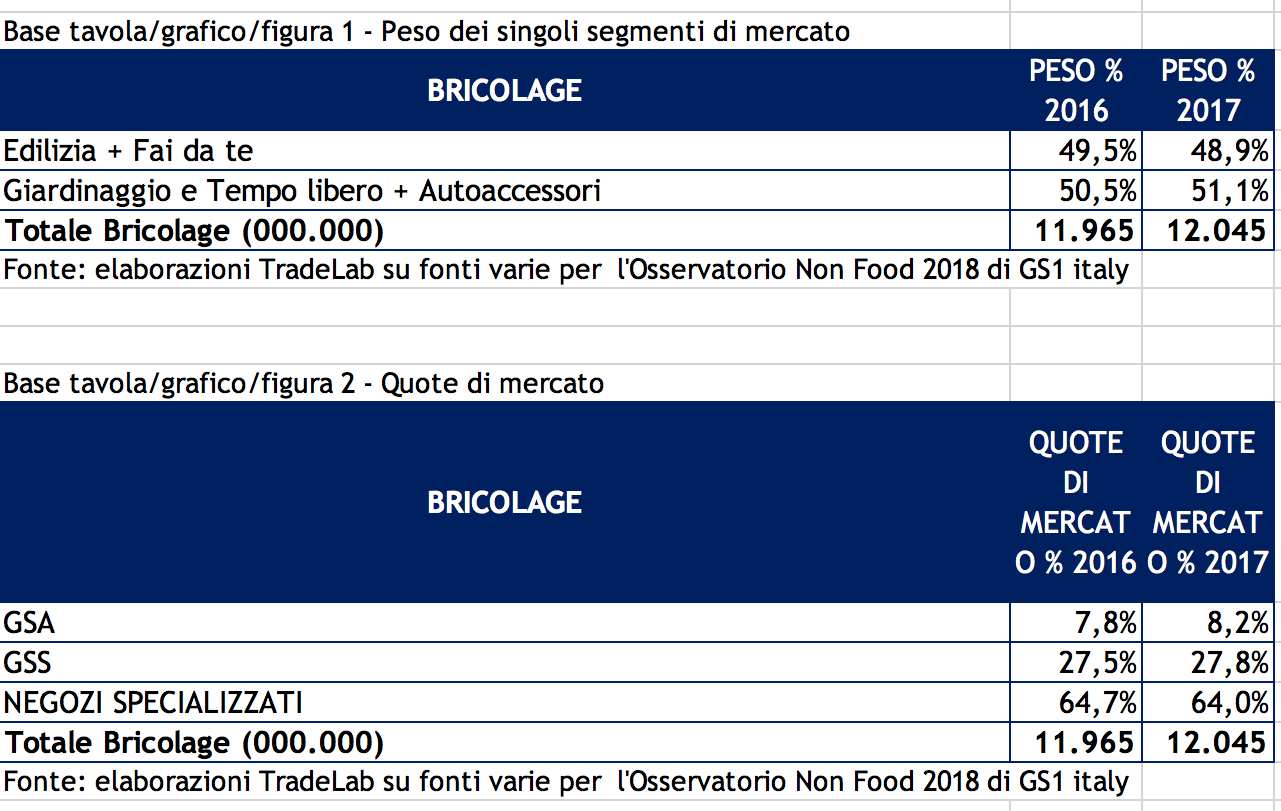 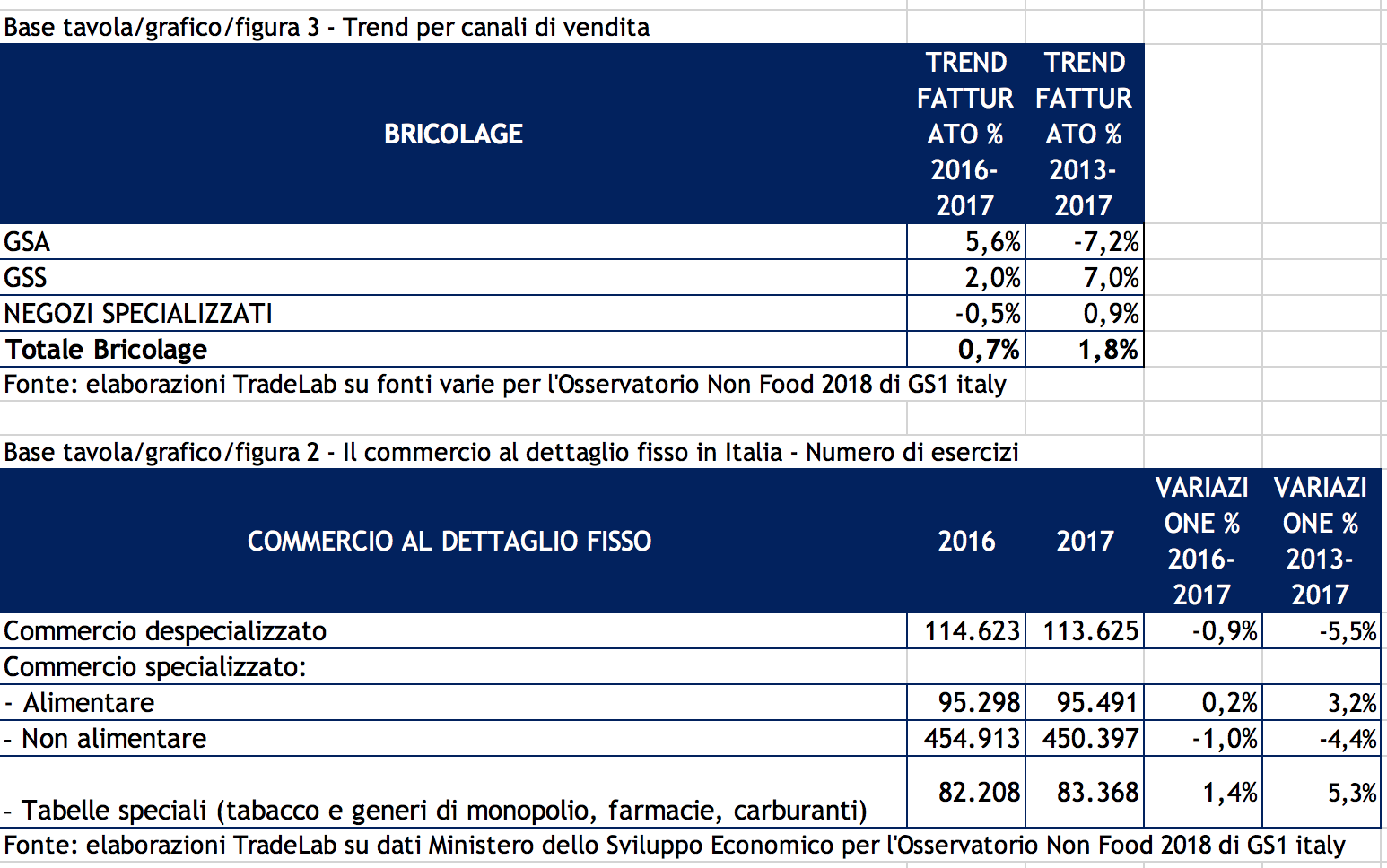